A measure of control 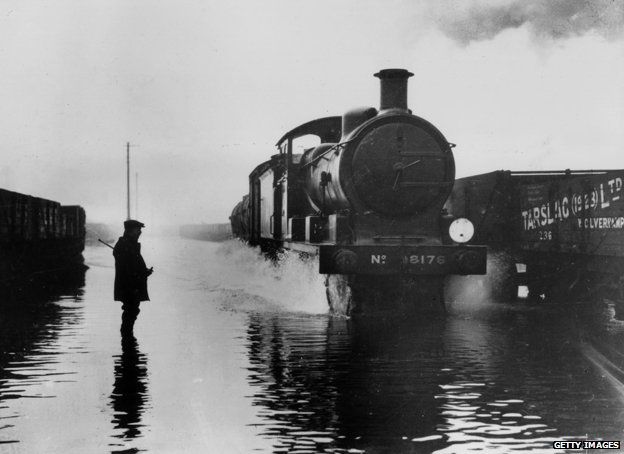 Jobs and cargoes flooded the big factories and workshops along the Bow Back Rivers, but there were more traditional types of flood too. Heavy rain in Hertfordshire would send a surge of water down the River Lea. If this met rising tide water coming up the Thames, the rivers here could burst their banks and flood out homes and factories.

A particularly bad flood in 1928 caused damage all along the Thames, and put the Stratford Railway Works under water (where Westfield Stratford now stands).

The answer was to invest in flood defenses to control how much water flowed where. In 1934 Carpenters Road Lock was built between the Waterworks River and City Mill River.

The giant radial gates allowed the lock keeper to regulate the flow of water from Waterworks River into the City Mill channel, thereby keeping the water level on either side below the danger point.  By using two gates, boats could pass through the without too much water being transferred between the two rivers. This ‘double radial’ lock gate reflects the need at Carpenters Road to allow river traffic while guarding against flood, and is unique in Britain.

Next: Canals vs. Trains

Make sure your volume is on: "George remembers being confused as a lock office boy"

Quite a funny thing I told Richard, because it has stayed with me forever.

You know that the bases have lock keepers and you know that the lock is about transferring a barge from one level of water to another, and so there are two pairs of gates that are closed one at a time so that the boat goes down, and so on.

Now during times of flood, sometimes if there is a danger of a flood at a particular place a number of lock keepers would be instructed to open and close the lock gates without there being a barge - with the intention of transferring a bit of water from one side to the other.

And when I was an office worker I used to have to look at timesheets when they came in. And one lock keeper had written, “Passing water for four hours.” And I rather thought he ought to have been given a medal for it, but they didn’t decide to do so!