Rivers run through it... 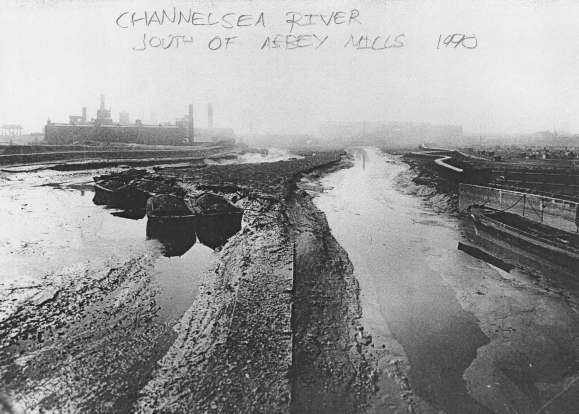 There are several rivers and waterways running through Queen Elizabeth Olympic Park, and together they are known as the Bow Back Rivers. They originate with the River Lea, which starts in Hertfordshire and flows south, joining the Thames at Bow Creek about two miles south of here.

A large river flowing through marshy land often makes several channels for itself. But the shape of the Bow Back Rivers has been changed over time as people dug out new sections to channel the water for different purposes.

The names of the rivers give clues to these purpose; Waterworks River was a major source of London's drinking water; City Mill and Pudding Mill rivers powered waterwheels to grind corn; the Lee Navigation was created as a route for boats travelling from place to place.

Until recently, the tidewaters of the Thames made some sections of the Bow Back Rivers look very different. Twice a day the river level would rise, making it hard to get boats under the bridges and even flooding low-lying ground. And twice a day the river level would drop, leaving wide muddy areas on either side, and the occasional stranded boat waiting for the next tide.

Next: Canals and Industries

Make sure your volume is on: "Floods and tides on the Channelsea"

John remembers the Channelsea river as a tidal reach

When the railways came into Stratford there were many rivers going across the marshes. You can even see them looking across the Olympic site today. There were more rivers then than what there is now. And one of those rivers was the Channelsea River.

Now the Channelsea rivers seems, looking at the map, to have disappeared…but I know it’s still there because I looked at it on Google. And the Channelsea River, at that point at the end of Rosham Road (?) was still tidal.

But it is draining the water from Hackney Marshes, so all the time it’s going out towards the sea until the very top of the tide, especially the neap tide, when it used to come back up and completely flood the tunnels underneath the station.

The Bow Back Rivers